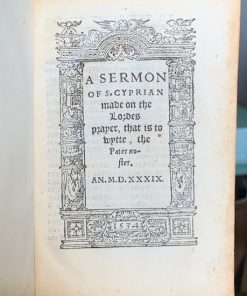 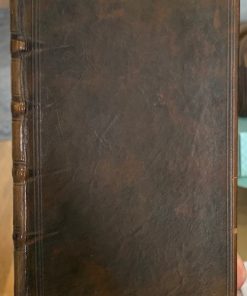 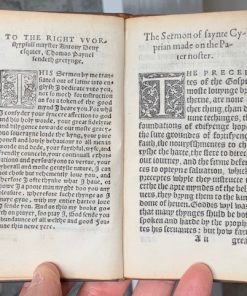 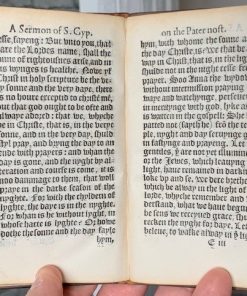 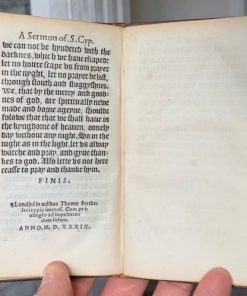 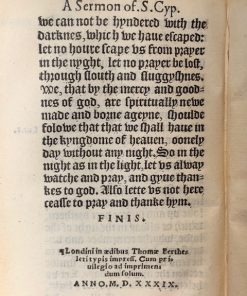 ‘A sermon of S. Cyprian made on the Lordes prayer’ 1539 Thomas Berhelet, London.

Small octavo [5.75’’ tall x 4.00’’ wide]. First and only edition. Collates complete 72p. A-Eiiii [Eiii being the final blank]. Set in black letter throughout; wooduct compartment on the title page [including date 1534], a fine copy in excellent, clean and crisp condition. Absolute minimal light marks only else a lovely copy of this early work by England’s renowned Tudor printer of the 1540 Bible. First and only edition. This translation of a sermon by Cyprian, bishop of Carthage, saint and martyr, who was executed during the persecution of Christians under Valerian in 258.

Thomas Paynell [d.1564?] was a canon of Merton priory but the house was dissolved in April 1538 and he received a pension of £10 p.a. Thereafter he was able to adapt himself to the various ecclesiastical regimes, becoming chaplain to Henry VIII and orator to both Mary & Elizabeth. Before and after the dissolution, Paynell was also very active as a translator, producing English versions of works by Erasmus, Ulrich von Hutten, Vives and others. Medical works seem to have been a speciality, as he translated more than one work on the plague, and also the Regimen Sanitatis Salernitatum. They were all published by Thomas Berthelet, with whom he presumably had a particular relationship.

Paynell dedicates the work to Sir Anthony Denny [d. 1549], one of the King’s most devoted friends and servants: Denny was a committed Protestant, and carefully enriched himself with monastic lands. He managed, also, to survive the storms of the last years of the King’s reign, and became privy councillor under Edward VI. STC 6156.

There is a single auction record in 1910 and no record since. Richard Heber had a ‘beautiful copy’ according to Ames in his ‘Typographical Antiquities’ and it appears in the eventual sale of Heber’s Library, Heberiana, on the Twenty-first Day’s Sale, p.291, Lot number 5356.

Only eight other copies of this book are recorded – BL, Bodleian, York Minster and two at Cambridge UL; Harvard, Folger and Huntington in the USA. ESTC also records a copy at the University of Sydney, but that copy is unverified and does not appear to be in their online catalogue.

Be the first to review “‘A sermon of S. Cyprian made on the Lordes prayer’ 1539 Thomas Berhelet, London.” Cancel reply