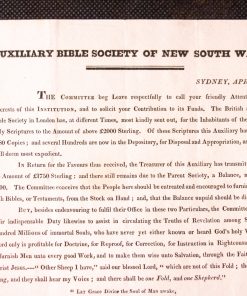 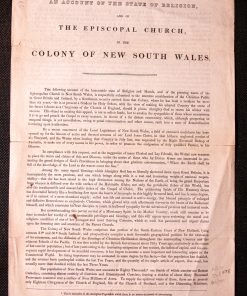 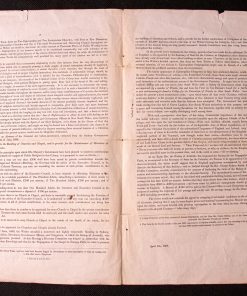 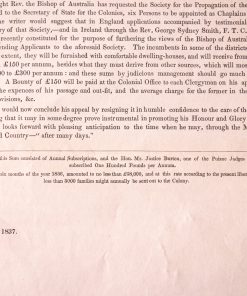 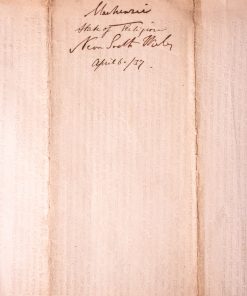 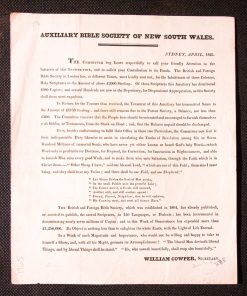 An Account of the State of Religion…in the Colony of New South Wales, 1825; [Bible Society NSW]

Two items of exceptional rarity and importance related to The Bible Society of New South Wales.

The first piece is a 4pp large 33cm x 20cm folded broadsheet printed to 3 sides and titled An Account of the State of Religion, and of The Episcopal Church, in the Colony of New South Wales dated 1837. It has been further folded in half and then again. Some small marginal closed tears. A copperplate ink inscription to rear and the Webster Collection stamp, number 2617. No other recorded copy to our knowledge.

This is a fascinating snapshot of NSW in 1830s, the lamentable state of Religion and Morals. “The population of New South Wales now amounts to Eighty Thousand, one fourth of which number are Roman Catholics, consisting almost entirely of Convicts and Emancipated Convicts, leaving a residue of about Sixty Thousand Protestants scattered over the surface of Four Million Acres. In Sydney, the principal Town, there are Two Episcopalian and Two Presbyterian Churches, with Four or Five Dissenting Chapels….this miserable disproportion is not however merely to be considered numerically, but with reference to the scattered state of the population….&c, &c.”

The second item relates to the First Australian Bible Society a single page broadside titled Auxiliary Bible Society of New South Wales, 228 x 190mm., a few pencil numbers and letters, lightly stained, Sydney, 1825. This is an early piece of fundraising, albeit couched and buried in spiritual terms; “He who soweth bountifully, shall reap bountifully …and the Committee now feel it their indispensable Duty likewise to assist in circulating the Truths among Six or Seven Hundred Millions of immortal Souls, who have never yet either known or heard God s holy World. Etc. etc.” Unrecorded. The Bible Society NSW was the first of its kind to be formed in Australia (Act of the Parliament of NSW, 1817). Provenance: Webster Collection, 2617 and 3895 (small ink stamp to verso)

Be the first to review “An Account of the State of Religion…in the Colony of New South Wales, 1825; [Bible Society NSW]” Cancel reply 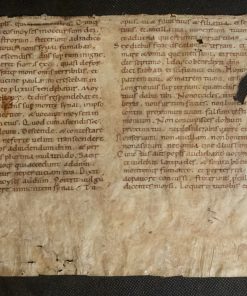 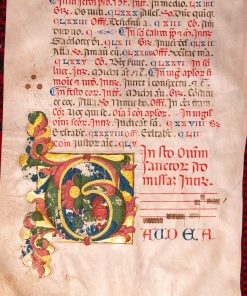 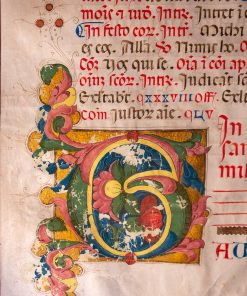