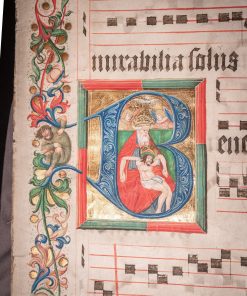 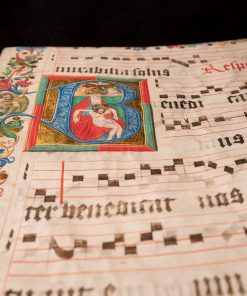 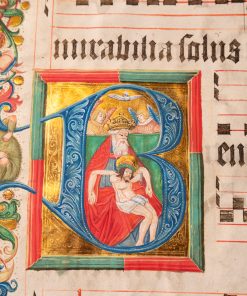 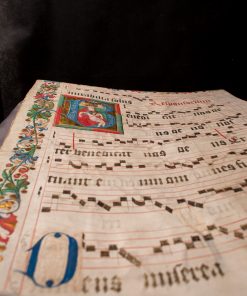 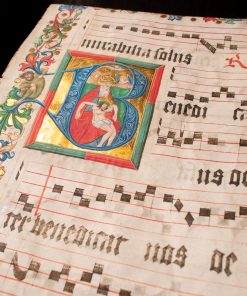 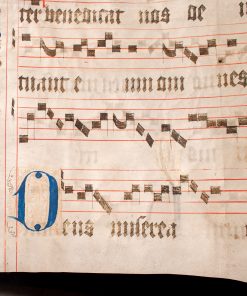 Single large leaf on vellum. 460mm x 345mm. illuminated capital B starts the Benedicat nos deus, the response for Trinity Sunday and represents God the Father as a white bearded man holding Jesus Christ the Son s lifeless body on his lap and the Holy Spirit in the form of a dove with two angels looking on from behind the throne. Painted within a red and green square frame on brightly burnished gold grounds, the gold heightened with yellow paint to pick out foliage, foliate sprays from the edges of the initial sprouting into the margin with coloured acanthus leaves, large gold bezants and gold pendulous fruit, with a green haired wildman with bare knees and elbows hanging from the branches and looking down at a bird in the foliage below, red and blue initials (one with contrasting penwork and two human faces at its side poking out their tongues), red rubrics, 6 lines of text with music on a 5-line red stave (rastrum: 35mm.; the number of staff lines an uncommon feature but not unheard of at the end of the Middle Ages, and not indicating polyphony), slight flaking from ink of main text in places, inkburn causing tiny holes in parchment in some letters and music notes, trimmed at top with losses from border there, slight stains at outer edge from last mounting, small scuffs and folds, else excellent condition. Another leaf from the same parent manuscript was sold in Sotheby’s, 7 December 2010, lot 10, realising £11,250, and identified as by a follower of the Bavarian panel painter and illuminator known as the Master of the Munich Saint John on Patmos, fl.1525-30

Be the first to review “Large illuminated historiated capital ‘B’ on stunning burnished gold. 1570.” Cancel reply 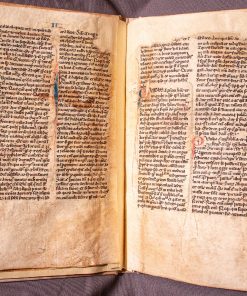 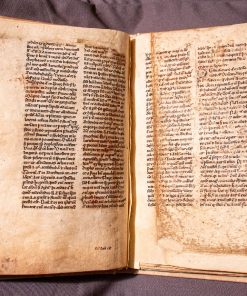 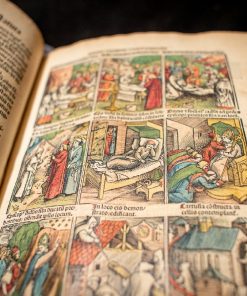 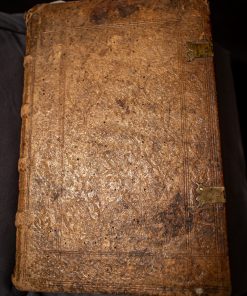 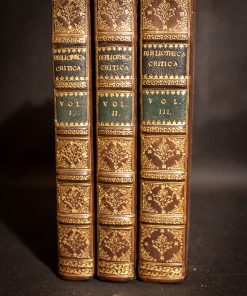