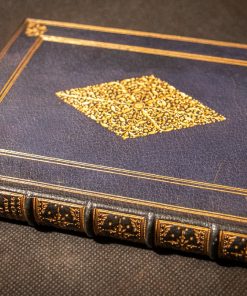 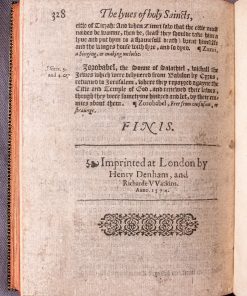 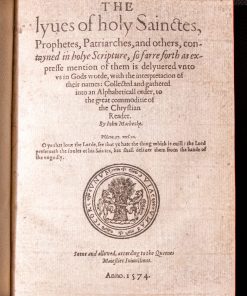 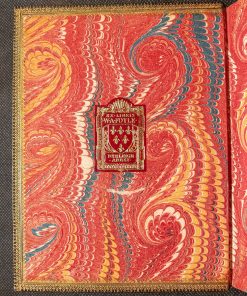 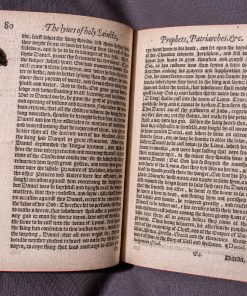 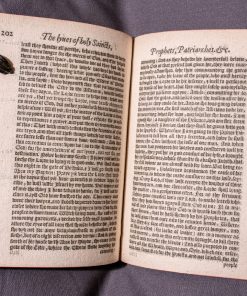 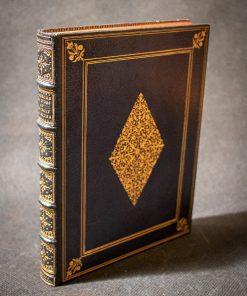 MERBECKE, John. The Lyues of Holy Sainctes, Prophetes, Patriarches, and others, Contayned in Holye Scripture.

Pleasing navy blue crushed morocco by Riviere (stamp-signed on verso of front free endpaper), covers gilt with frame of French fillets, fleuron corner-pieces, large and complex central
lozenge of small tools, raised bands, spine gilt in compartments with fleuron centerpiece, volute corner-pieces, gilt titling, turn-ins densely gilt, marbled endpapers, all edges gilt. Front
pastedown with morocco bookplate of W. A. Foyle, Beeleigh Abbey. STC 17303. A little rubbing to joints and extremities, first and last pages a little soiled, text lightly washed and
pressed in keeping with the bibliophilic fashion of the day, but a clean, fresh copy, with leaves that crackle when turned, and in a lustrous binding. Attractively bound and from a distinguished
collection, this biographical dictionary of figures from scripture contains not only the saints, prophets, and patriarchs, but also those who appear only in passing, like Damaris, a Christian
woman in Athens mentioned in a Pauline epistle, and Asaph, a singer appointed by David to “the House of the Lord.” The latter might have particularly resonated with Merbecke (also
“Merbeck” and “Marbeck,” ca. 1510-ca.1585), a musician and theologian who began his career as a choirboy in St. George’s Chapel, Windsor, where he later served as the organist for most of three decades. He cemented his place in the history of the Anglican Church by composing the first noted edition of the Book of Common Prayer. A strong Calvinist, he undertook the considerable project of preparing a concordance of the Bible, a feat for which he was tried and convicted of heresy. As evidence of his outstanding musical talents, Merbecke received a royal reprieve (while his three–no doubt less musically inclined–co-defendants died at the stake). He immediately went back to work on his concordance, which, when finally published in
1550, was the first complete such work in English. Our finely bound copy comes from the library of W. A.Foyle, co-founder with his brother of the famous Foyle’s Bookshop in Charing Cross Road. The three large Foyle sales at Christie’s held in 2000 were a bibliophilic highlight of the new century, and the sum of $19 million for which William Foyle’s personal library sold in July set a record for private European collections. This work is rare in the marketplace: the last copy at auction seems to have appeared in 1982, and RBH and ABPC list only four copies sold at auction since 1900. (ST13630)