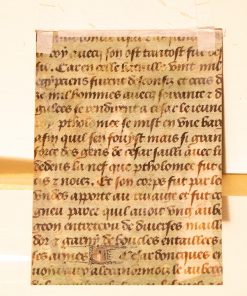 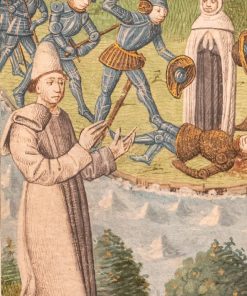 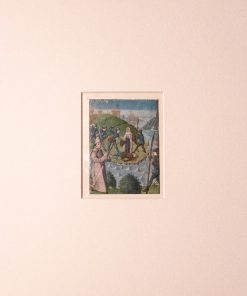 Parchment, a cutting, c.105×80mm, with a miniature on one side and 17 lines of text on the other, ruled in pale red ink, written in a very fine lettre bâtarde script, capitals stroked in yellow, a gold paraph with blue penwork, with some minor flaking of pigments in the sky at the upper edge and in the ground near Boccaccio’s feet.

This present cutting represents a completely different kind of survival to usual leaves used by binder’s. In this case the text leaves of the parent manuscript have perhaps suffered the same fate as binders’ waste, but the illuminations were carefully cut out and preserved, probably in the 19th century. As such the miniature shows none of the signs of rough handling that the others do, and is in very good condition.

The so-called lettre bâtarde (so named because it was the offspring of very different cursive and gothic scripts) required fewer pen-lifts than gothic, and could therefore be written more swiftly, than more formal gothic ‘textura’ book-hands, yet it could also be written with a very high degree of regularity and elegance, as in the present example. The characteristic letter-forms are the ‘f’ and tall ‘s’ that have a wide shaft and descend well below the line, the cursive loops at the top of ‘d’ and ‘l’, the ‘s’ at the end of words shaped somewhat like a small ‘8’, while the loop at the top of ‘d’ makes it appear similar to a large ‘8’. Where formal gothic scripts are usually upright, with fairly vertical minims, lettre bâtarde leans to the right, like Italic. The fact that the text is in French rather than Latin also affects the overall appearance, through the more frequent use of the letters ‘y’ and ‘z’ (the former with a tail that turns to the right and the latter shaped like a ‘3’ descending below the line).

The translation was made for the Duc de Berri, and is a rather surprising choice of text as it relates a series of stories about how successful and rich people come to a bad end!

The style of illumination of cuttings from this volume has usually been compared to that of the Parisian Coëtivy Master (who was previously thought to have been based in the Loire valley), but more recently Mara Hofmann has suggested that it should instead be attributed to Troyes where a pupil of the Coëtivy Master, the Master of the Glazier Hours, worked at least temporarily (he illuminated a lectionary for the use of the Bishop of Troyes).

By comparison with other manuscripts we know that the foreground figure with white academic garb and a conical hat represents Boccaccio, but the subject of the scene is not yet confidently identified. In 2014 Sotheby’s described it as “the Victory of Caesar during the Siege of Alexandria and the Death of Ptolemy: Boccaccio at the left gesturing towards a battle scene at a riverbank, with Ptolemy lying on the ground and a priest standing behind him, the dead body being attacked by Caesar’s soldiers (Ptolemy drowned when he attempted to cross the river)”, but this does not fully explain the “priest” (dressed as a Carthusian?), nor does it explain why a soldier would need to strike Ptolemy’s neck (from which blood pours) if he had already drowned. It may be that the artist did not know the text and has added the incongruous details, not found in his exemplar.

(1) With a half-page miniature at he beginning of each of the nine books and a column-wide miniature at the beginning of each chapter the parent volume would have had about 175 miniatures, and can only have been commissioned by or for a patron of exceptional wealth, either a member of the upper aristocracy or of the royal family: two of the most lavishly illuminated copies were made for Jean, Duke of Berry, and his brother John the Fearless, Duke of Burgundy.

The surviving fragments suggest that the manuscript had a large half-page miniature introducing the first chapter in each of the nine books and small single-column miniatures for each (or most) of the subsequent chapters. Other miniatures all from the same manuscript, include:

The subjects of six more miniatures are unknown, including four acquired in 1888 by the Print Room of the Rijkmuseum, Amsterdam (they have paper pasted to their backs, obscuring the text and hampering identification of the scenes):

Only a few of these are mentioned in Vittore Branca, Boccaccio visualizzato: narrare per parole e per immagini fra Medioevo e Rinascimento (3 vols, Turin, 1999), III, no. 57 pp. 158–60.

A recent study of illustrated copies of the text (not including the present series of miniatures) is Anne D. Hedeman, Translating the Past: Laurent de Premierfait and Boccaccio’s ‘De Casibus’ (Los Angeles, 2008).

Be the first to review “The Death of Ptolemy, a miniature on a cutting from Laurent de Premierfait, [France, probably Troyes, c.1470]” Cancel reply 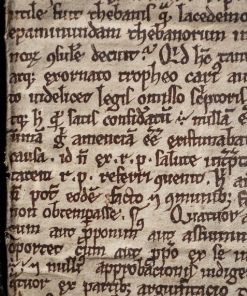 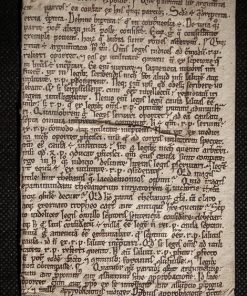 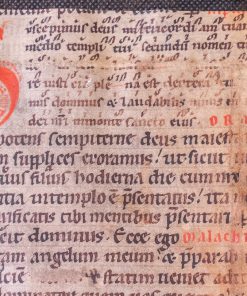 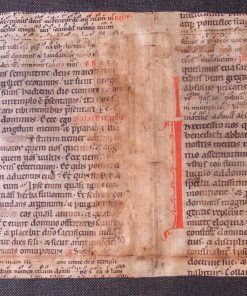