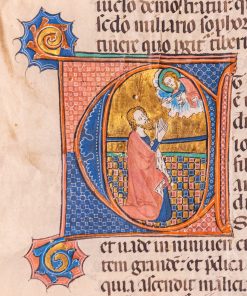 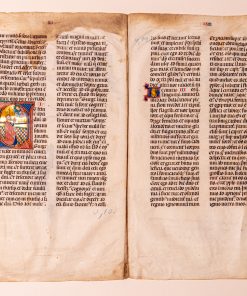 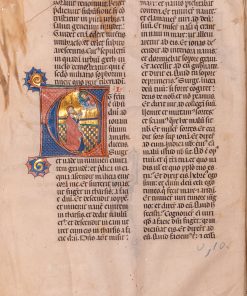 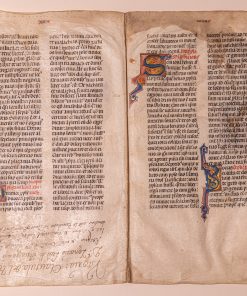 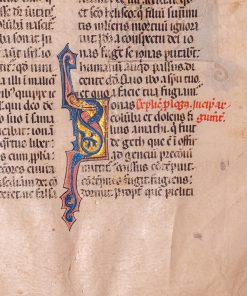 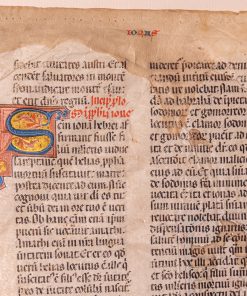 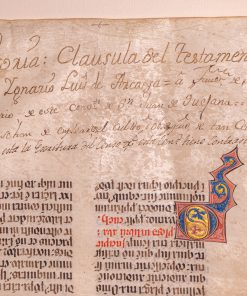 Jonah Kneeling in Prayer Before God on a bifolium from a Bible in Latin [Northern Spain (diocese of Álava?), late 13th or early 14th century]

Parchment, a bifolium, each leaf c.400×275mm; ruled in plummet for two columns of 33 lines; written in a fine Spanish Gothic script; illuminated with with a large nine-line historiated initial, a two-line illuminated chapter initial, and three three- to five-line initials introducing the prologues; rowing of sewing holes along the upper and outer margins show how the bifolium was sewn to form a document pouch; two small worm-holes in the background of the initial do not detract from it unduly; water-staining in the upper outer corner of the bifolium does not touch the illumination and does not affect the legibility of the text.

(1) Owned by the monastery of San Juan Bautista, Quejana (in Álava province, 25km south-west of Bilbao), to judge by the later provenance; apparently dismembered there, perhaps before the end of the 18th century, with leaves being used as wrappers and pouches for documents including “privilegios”; among the added inscriptions are the dates 1795 and 1809, and several place-names including Menagarai, Zuaza, and Orduña (all within five miles of the monastery), Okondo, Orozco and Arakaldo (all within ten miles), Menoio, Zeberio,and Zollo.

The large historiated initial depicts Jonah kneeling in prayer on a diaper floor, looking up at God above, in clouds against a gold ground; this illustrates the text which begins “Now the word of the Lord came unto Jonah the son of Amittai, saying, ‘Arise, go to Nineveh …’”.

The known leaves are listed and discussed in Peter Kidd, The McCarthy Collection, II: Spanish, English, Flemish and Central European Miniatures (London, 2019), no. 8. Their text extends from Kings in the Old Testament to the Pauline and Catholic Epistles in the New. The Bible may originally have been in a single huge volume, but medieval foliation suggests that it was later divided into two, or perhaps three, volumes: the present leaves were the outermost bifolium of the first quire of one volume, and is foliated “i”’ and “viii”. There seem to have been three illuminators: the one responsible for the Jonah initial also painted the initials introducing the New Testament books.

Spanish illumination very rarely appears on the market. The present high quality example was probably made in the small kingdom of Navarre, flanked by the much larger Aragon and Castille, and not far from southern France, with which it has some stylistic similarities. During the period when the present Bible was created the region was, in fact, under the rule of successive Kings of France, as a result of Philip IV of France’s marriage to Joan of Navarre in 1284.

Be the first to review “Jonah Kneeling in Prayer Before God on a bifolium from a Bible in Latin [Northern Spain (diocese of Álava?), late 13th or early 14th century]” Cancel reply 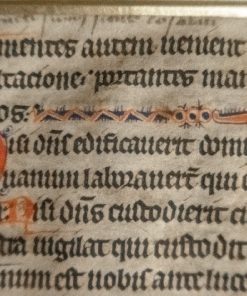 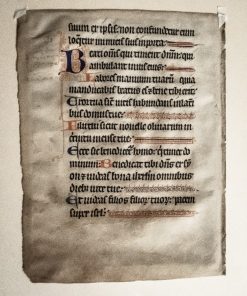